Today was a well earned rest day from the normal early rise and hard days that have made up the majority of our trip so far. Instead of having school and activities we were able to spend the day with our family. For me, this meant that I could sleep until 11 o’clock, which meant I woke up feeling better than almost any other day so far. Breakfast was the same as I had every day, eggs and cereal, and as I ate, my host parents (who had been up for a couple hours already) were where they usually were, in front of the tv, watching some movie in Spanish. Umberto (my host dad) usually went to the beach around 12 so we decided to all go together for our Sunday "family day." Although I usually took the bus to get around Cadiz, they had a car so we all took the car to the beach.

Once we got there they just set up chairs and sat back to relax, but a bunch of other kids from RL were there as well, so I went and found them. The wind was really strong that day, so the waves were a lot bigger than they usually were so we decided to go body surfing. I had done a lot of body surfing in North Carolina before, so I really enjoyed this. The waves were so big you could ride them from all the way out until where there were only a couple inches of water. However, also because of the wind, the water was freezing cold so we didn’t last for more than 20ish minutes. When I came in I went back to where Mila (my host mom) and Umberto were sitting, still relaxing. I was tired so I laid on the sand, put a towel over my head and went to sleep. We left to go back to the house around 2:30ish.

Later, after dinner, I went back to the beach to meet up with friends. Sunset was around 9:45 PM that day, so we got there around 9. Overall, swimming in the ocean as the sun goes down will be one of my most memorable experiences from the trip. Just standing in the water as the waves wash over your feet, thousands of miles from your homeland in a foreign city on the beach was, and will always be, a surreal experience for me. Other than that, the trip in total was an unforgettable experience, and I’m sad that it went by so fast. The fact that I’ll probably never see the Spanish friends that I made there ever again, and because of the 6-hour time difference, it’ll be pretty hard to stay in touch, which means that returning to America will be hard, but hopefully the memories will remain for as long as possible. As my alarm went off at 5:15 in the morning, it slowly set in that this was the last day of the Spain trip. Grumbling a little, I got out of bed and took a shower before heading to the lobby of Madrid’s Hotel Moderno… just as we did at the very beginning of the trip. I greeted a few of my sleepy companions, and after a bit of waiting for some stragglers, we left the hotel. After getting slightly lost a few times, we made it to our bus and eventually to the airport. Once at the airport, a bunch of us headed to McDonalds for breakfast and before too long we were waiting at our gate. 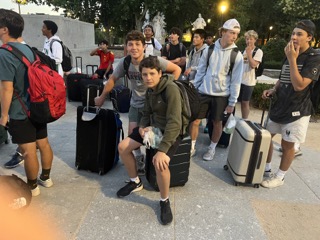 After three and a half weeks in Spain, I feel ready to go back home and see my family again, but this trip was an unforgettable experience. Several others feel the same way – we are happy to go home but sad that this amazing trip is over. I will miss talking with my host mom during dinner about everything from the weather to family to politics. I will also miss watching TV with the 89-year-old abuelo of the family. We watched such notable programs as “Ruleta de la Suerte” (Wheel of Fortune) and “Pasapalabra.” It quickly became routine to watch “Ruleta de la Suerte” while we were eating lunch as the show came on at about 1:50 pm on weekdays. Watching “Ruleta de la Suerte” was a great way to measure my Spanish speaking ability. Towards the end of the trip, I was figuring out the phrases before the abuelo, which is a major accomplishment in my opinion because he’s pretty fast.

Anyway, from watching Spanish word shows with my host family to going to classes at the school, this trip was an incredible, once-in-a-lifetime experience for me. If and when I return to Spain, I’ll be sure to visit my host family and maybe treat them to some churros con chocolate. Spanish has always been among my favorite classes at Roxbury Latin, but actually living in Spain for almost a month bolstered my understanding of the language and of Spanish culture more than I could have ever imagined.

The trip home has started. I woke up at 9:00 AM so it was nice to sleep in a little more than usual in comparison to our 9:15 start for school in the usual Cádiz schedule. Sadly I didn’t get to say goodbye to my host family in person (because they had already left for the day), but I left them their gifts and a note on my way out of the house. It was a bittersweet feeling when I got all of their messages on WhatsApp as both my host sisters and mother kept on messaging me about how great it was to have me in their house. I was happy to be going home but that doesn’t mean I was happy to leave Cádiz; this paradoxical thought plagued me (when I wasn’t sleeping of course) throughout a large portion of the 4-hour train ride back to Madrid.

This trip has flown by at light speed for me. We have done so much and yet at some point it all blends together… and just like that, the trip is over. A whole month has passed by in what seems like a week. The Cádiz portion of this trip especially seemed to pass by extremely quickly. When I think back to when we took exams, that felt like ages ago, but we left for Spain right after! But this sped-up perception of time doesn’t change how much I’ve gained from this trip. I’ve met so many new people, whether it be on the court during recess at school or on the beach in the afternoon. The people here really are just *people*, only they speak Spanish. I feel as if we come with this expectation that they are going to be a different species, but then when you actually talk to them, you realize they really are just like us. Of course Cádiz does have its fair share of differences, but that’s what’s fun. The different culture only adds to experience and to what you gain from the trip.

Overall, while my Spanish vocabulary may not have expanded too much over the course of this trip aside from being conditioned to say vale (“OK”) every other sentence; however, the way I maneuver the language has really improved in my opinion. There is nothing more helpful in improving how to speak a language than to simply speak it. Being in natural environments where I’m surrounded by Spanish at all times has helped me see what’s natural and helps me know more of the nuances that allow the words to flow better. Looking back on this trip I can only think about how fortunate I am to have had this. This literally changed me and I am ever grateful for the opportunity to have gone to Spain with RL.

We started today with our usual short morning of school to which I had become pretty accustomed. On this last day I took the walk to school with quite a bit of sadness and nostalgia knowing it would be the last time I made the trip. When we got to school each of us did a presentation on someone from our host families and presented one of our favorite places in Cádiz via a picture. It was fun to sit in the classroom with everyone after having all our shared experiences and having gone through the whole program successfully. We all had plenty of memories from the city and this was a fun final day to spend talking about it.

Later we all went out to eat lunch at various restaurants in the street with all of us packing into one bus to get where we wanted. It was a fairly peaceful last day walking through the city that we had all explored thoroughly. Afterwards, some of us went to the beach, others walked down the streets of the old city, and some got some much needed rest from the busy schedule at our houses.

Finally, later that night we all came together for the departure dinner outside at a very peaceful spot in Cádiz (Plaza del Mentidero) next to a fountain. We had some conversations reminiscing about the trip, saying how glad we were that we went on it, and looking back at fun adventures from it. After the dinner some of us went out for our final ice cream of Cádiz then quickly took the last bus to return home.

This was the final day of the trip for us all and there was certainly a lot of emotions and reflection happening. I played my favorite songs on the way back home and felt pretty emotional about the trip coming to an end. The trip took a long time to finally arrive, but when it did it went by in what seemed like an instant. Personally, my brother had taken this same trip years ago and I looked back on the fact that my Cádiz experience was ending as my brother’s once had. I walked the same streets for the last time as my trip came to an end feeling happy with how it had gone. I took a few pictures on my walk home to remember things and headed to sleep.